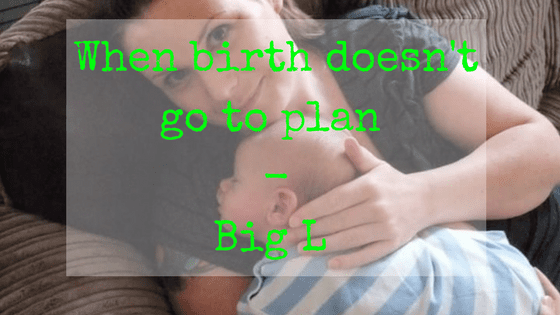 I clearly was never meant to have the calm, natural water birth I had planned both times. The birth of both my babies went royally tits up and both ended up in SCBU. Both had the cord around their neck.  How’s your luck? Big L was slightly less dramatic (although it didn’t seem so at the time). His was a natural birth with gas and air. I’ll try to keep this brief, try to bear with me. Me and Big L

Big L  was almost 2 weeks overdue and I was supposed to be induced but I hadn’t felt him for a while so I went into hospital.  I was put on a monitor and everything seemed fine but his heart rate was a bit up and down and they’d induce me the following day. I started having contractions at midnight so the induction wasn’t necessary.  I wasn’t really progressing so at about 5.30pm I was taken to the delivery suite and at 6pm my waters were broken. A clip was put on Big L’s (big) head to monitor him.  I can’t remember much that followed as I took a bit of a liking to gas and air.  I remember the midwives changing over and being checked and told I’d be there all night.  Shortly after this I recall a feeling of needing to push.

“You don’t need to push, you’re no where near 10 centimeters”

And without further ado I began to birth Big L

An ex colleague of mine told me that when the baby crowns (you know, the bit where a big fat baby head starts to stretch what is possibly the most vulnerable part of a ladies anatomy) “it feels like a thousand candles on your fanny” and you’re supposed to pant like you’re blowing said candles out.  It doesn’t. It’s far, far worse.  Remember the scene in Backdraft where the fireman opens the door? Now you’ve got it.

The problem is the head gets there and stays there for what feels like eternity.  I didn’t want to pant.  I wanted a fucking fire extinguisher.  Then came the worst words you can hear.  “The baby’s in distress, the cord is round his neck, you need to get him out”. I’d never felt such a failure as I did when I couldn’t push.  I had nothing to push with.  No contractions and despite it being around 9pm (yup, it was quick) I was knackered. I was being encouraged to push.  My legs were in stirrups and the world and his wife were gazing up my lady garden, the state of which I had already apologised for and was reassured by the midwife that I had actually done a very good job of tidying up, especially since I couldn’t see what I was doing.

Anyway.  Big L in distress.  No pushing.  Me shouting “Get the baby out”. Not the calmest birth. So, I had an episiotomy and Big L was born at 9.21pm. It turned out that

2) every contraction pulled the cord tighter

4) his head was the shape of a cone

Luckily he was breathing when he was born but that did mean he inhaled meconium.  There was some talk of brain damage and he was whisked off to SCBU

I was stitched up.  Royally

I had a shower and did the obligatory wee in the cardboard hat. I wanted to see my baby.  Vince went off to find out what was happening. He was gone ages. When he came back I found out he’d been taken to see Big L without me.  I was livid.  I demanded to go myself.  Seeing your baby in an incubator is one of the most horrific things you’ll ever see.  It’s not how any mother imagines her birth. No skin to skin, first breastfeed, nappy. Instead you get to peer at the human you’ve carried for 9 months through a plastic shield. I was taken up to the post natal. Taking a new mother whose baby is in SCBU to a post natal ward is positively cruel.  You sit there and listen to all the other babies cry and coo while your baby is in a different floor.  It really is like leaving a piece of your heart behind. The midwives came into my room (the hospital was new and had private rooms) and insisted that Vince leave.  No, you got that right.  Our baby has just been born and is in SCBU we don’t know what is wrong with him but what’s more important is that the father be ushered out of the hospital. Fucks sake.  Vince dutifully did as he was told. He shut the door behind him and I was alone. Looking at the empty cot my baby should have been in.  Then I heard him talking  to the Dr outside.  The Dr was discussing OUR baby without ME. I lost the plot and screamed the ward down.  Finally Vince came back into the room with the Drs and a midwife and they calmed me down and explained what was going on.

Then came the expressing.  Oh God the expressing.  Desperately trying to fill up the tiny, tiny syringes with milk so they could give it to Big L. No one bloody told me how much to expect to express and I was trying to fill the blinking things up feeling like a failure yet again! I was overjoyed when I went to SCBU and nervously handed over the pitiful amount of colostrum I’d painstakingly tweaked only for the nurse to say “well done, that’s plenty” then pop it into his feeding tube.

Big L went from strength to strength and after 4 nights in SCBU he was on the ward with me and we went home shortly after. I on the other hand was suffering.  I may have overdone it a bit, storming around the hospital and so on and my stitches broke down.  Not fun. They don’t like to restitch due to the risk of infection so it had to heal by itself.  You can uncross your legs now! It did heal but it took a very long time!

I wrote a letter of complaint to the hospital and we met with the head of midwifery to discuss what happened and why.  Both Vince and I were traumatised by the events and we needed to address it.  I would urge anyone in a similar situation to do the same.  It put a lot to bed for us and the hospital learnt from it too. Fathers can stay at the hospital overnight now and I shouldn’t have been put on the postnatal ward.

The main thing is, as it turns out, Big L is fine and I’m proud of him every damn day.  Even if he does drive me a little bit mad.

So Big L was born (and is now a strapping 5 year old) and another reason for the phrase “it is what it is”. As I said Big L’s birth was less traumatic than Little L’s which you can read here

If you have any concerns during your pregnancy please speak to your midwife or birthing centre.  Do not think you ate wasting anyone’s time! Also please count the kicks

It could save your baby’s life. Family Life It's all a bit Political Topical Ranting 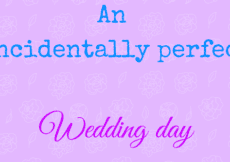