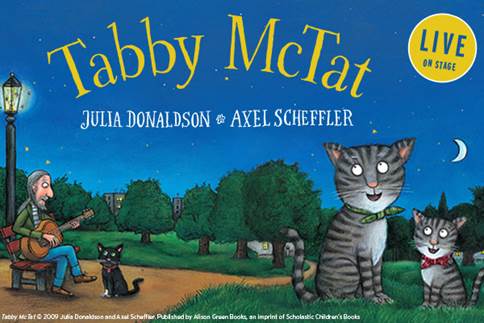 I’ll be honest, Tabby McTat isn’t one of Julia Donaldson’s books that we read often, but we are familiar with her rhyming tales and our children love them. Our favourite is Cave Baby, since you ask.

We arrived at Churchill Theatre in Bromley with plenty of time to spare, there were lots of young children already very excited about the performance. We haven’t taken our children to many live productions so were unsure what to expect behaviour-wise; however we needn’t have worried.

Before the show started there were a lot of fidgety bottoms however that soon stopped once Samuel Spratt took the stage. 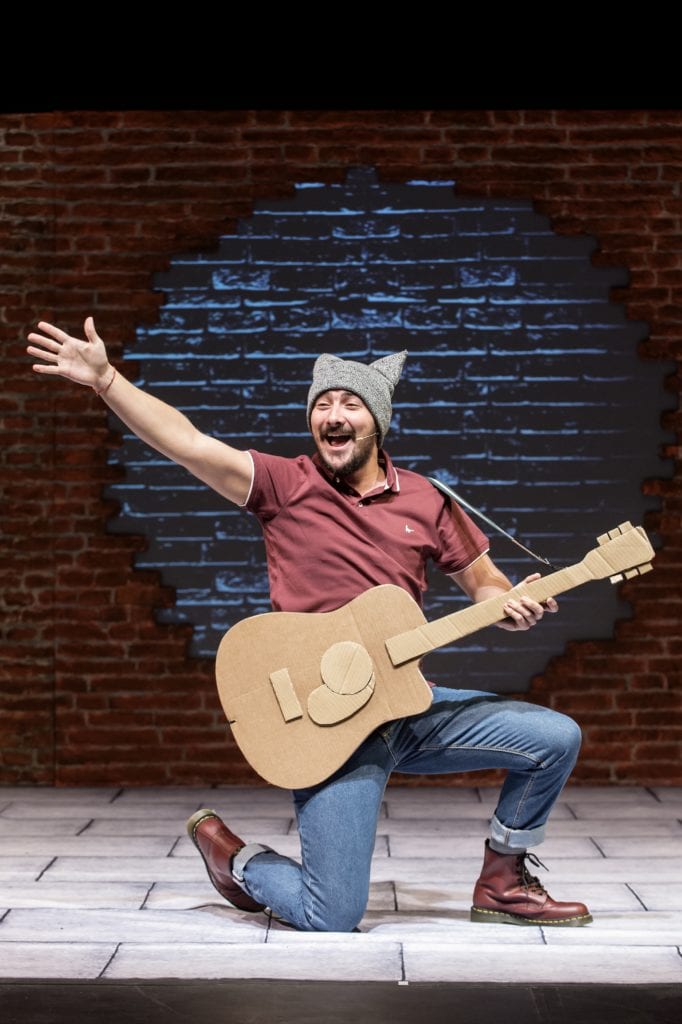 Tabby McTat Live is told through the eyes of Tabby’s son, Samuel Spratt

It is cleverly adapted by 4 actors playing all the parts. They can be told apart by the hat or costume they are wearing, which is a great way of keeping the children entertained. Each actor takes a turn as each character keeping the roles fairly gender neutral too.

The stage is fairly minimalist so the main focus is on the actors, who change the scenery themselves. I always think this is very clever and enjoy watching how scenery unfolds to become something or somewhere else. 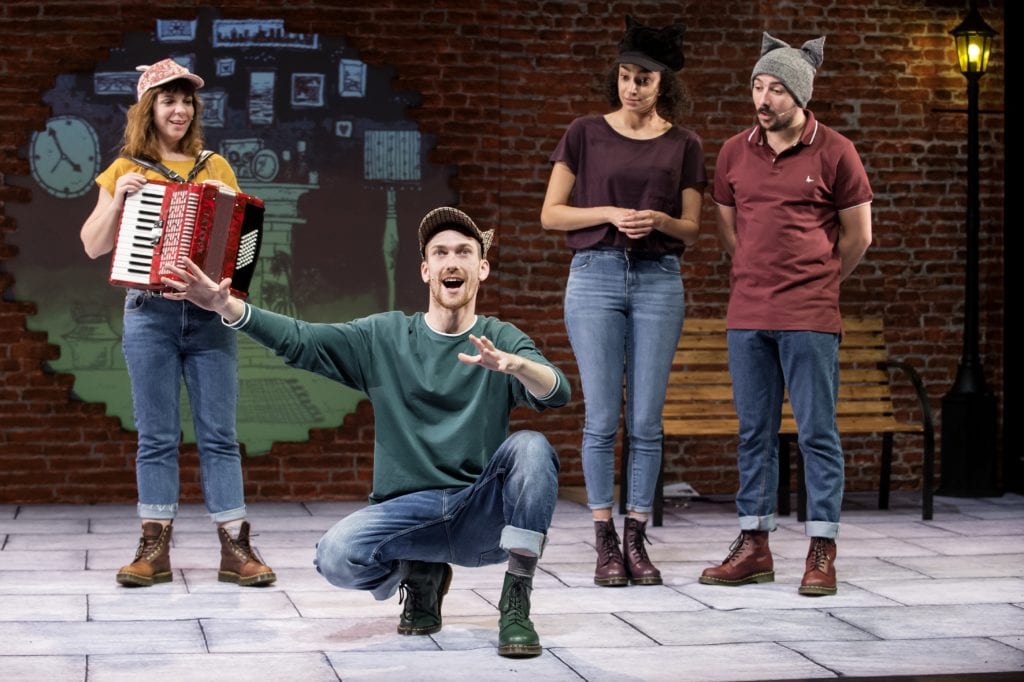 What’s Tabby McTat the live show all about?

Samuel Spratt tells the tale of his father, Tabby McTat and his best friend, busker Fred.

They used to make money with Fred playing his guitar and Tabby McTatt singing (his miaow is loud and strong, after all). One day, while Tabby McTat has wandered off and is chatting to a lady cat, Fred’s hat with the money they earned is stolen. Fred takes chase after the robber but falls over and is hurt and ends up in hospital. Tabby goes back but can’t find Fred and thinks he’s abandoned him.

Tabby McTat befriends Sock, the nice lady cat, who invites him to live with her and her humans. Tabby takes to life in a nice warm home. Obviously neither of the cats have been neutered as the inevitable happens and they have kittens, Samuel being one. The kittens are homed, apart from Samuel who is too noisy, his miaow is far too loud and strong!

Samuel doesn’t really fit in with the cosy family life and longs for adventure. Meanwhile, Tabby continues to look for Fred and eventually finds him. Fred asks him to join him again but Tabby wants to stay with his family. Samuel asks if he can join Fred instead, but he cannot sing for toffee. He find his voice soon enough and Samuael joins Fred and Tabby goes back to Sock and the humans and everyone is happy.

Me, you and the old guitar,

How perfectly, perfectly happy we are.

MEEE-EW and the old guitar,

How PURRR-fectly happy we are. 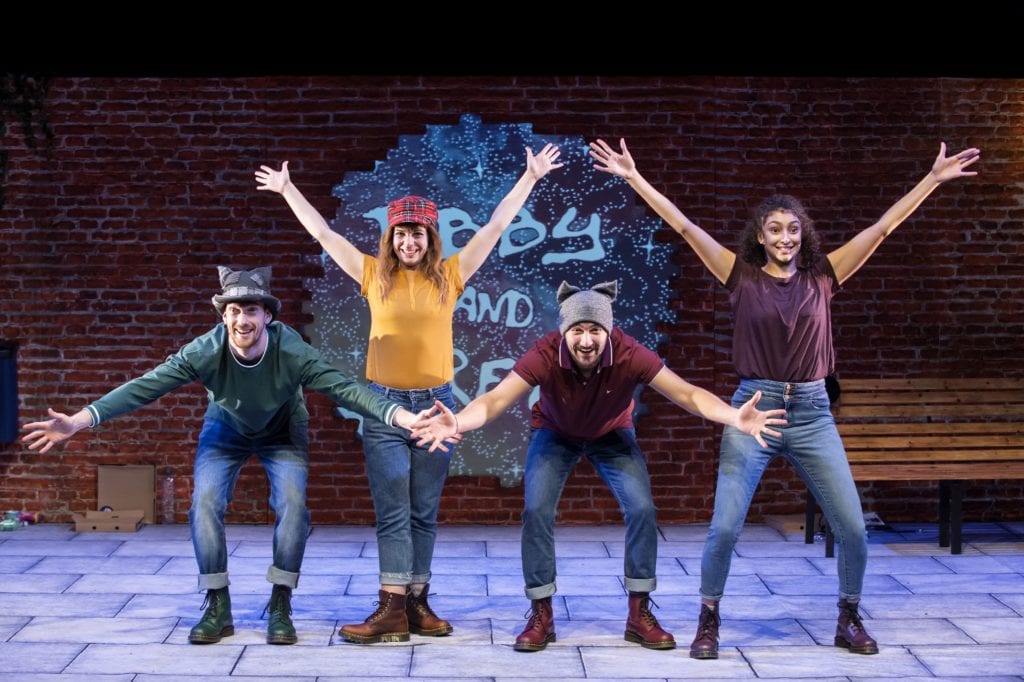 What did we think of Tabby McTat at the theatre?

My 8 year old was too old for it, we expected that, but our three year old absolutely loved it. He did get a bit fidgety towards the end but his little face lit up and it was a joy to watch him. He loved the singing and even my 8 year old was amused by the magic show in the middle.

The show was an hour long which is quite long enough for the age group it is aimed at but not too short either.

At the end of the show we all learned the special handshake, even the adults got involved!

All in all it is a charming production aimed at pre-school to 5/6 year olds. Its use of drama, dance music and even the splash of magic in the middle kept us entertained throughout (apart from my 8 year old, who is too cool for these things apparently). 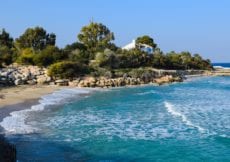 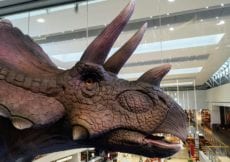 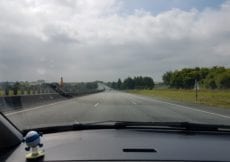 Family Life Living with children Travel and Days Out