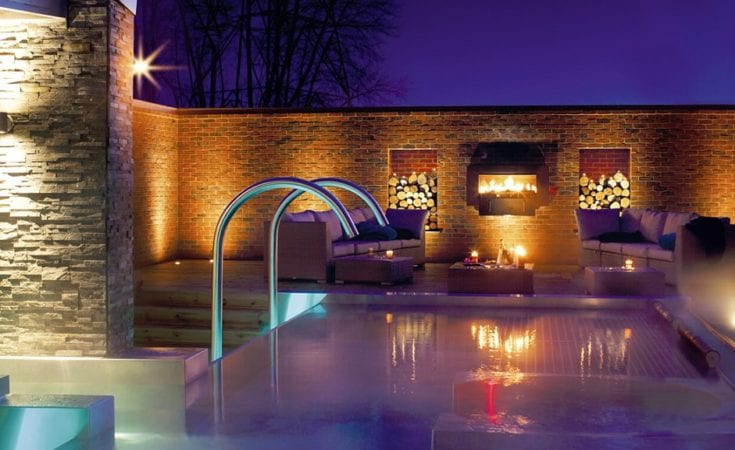 I was lucky enough to be invited to stay (and review) Wyboston Lakes resort along with my Blogging Besties; Anna from Me, Annie B and Nikki from Yorkshire Wonders. Our stay was gifted but all opinions are my own

Wyboston Lakes Resort is comprised of The Waterfront Hotel, Wyboston Lakes Golf Course and Y Spa. As well as the Woodlands Event Centre and The Willows Training Centre.

The resort itself is a short drive from St Neots train station, Bedfordshire, which gave me the opportunity to use the phrase “up the wooden hill to Bedfordshire” (at least I found it funny, it’s the little things).

We missed the turn off for the resort at first but a short trip to the next roundabout and we soon worked out where we were meant to go. It does feel like you are heading into an industrial estate but bear with it!

Wyboston Lakes is a fairly large resort, with the Y Spa being set within the Waterfront Hotel facing a large lake and the golf course.

On arrival we were greeted by a bright and relaxed reception area and given our keys. We confirmed times for our meals and use of the spa and hurried up to our rooms.

The hotel is in another building adjacent to the spa and restaurant. We were given rooms next to each other on the first floor. Thankfully there is a lift to the first floor, despite only staying one night we had each brought enough to see us through several – wishful thinking!

We each had a Superior Room at the Waterfront Hotel, which are the cheaper of the rooms on offer

My room was clean and immaculately finished. There was a nice sized dressing table with the best vanity mirror I have ever seen – it had a motion sensor light! I need to find out where they are from as I really, really want one! 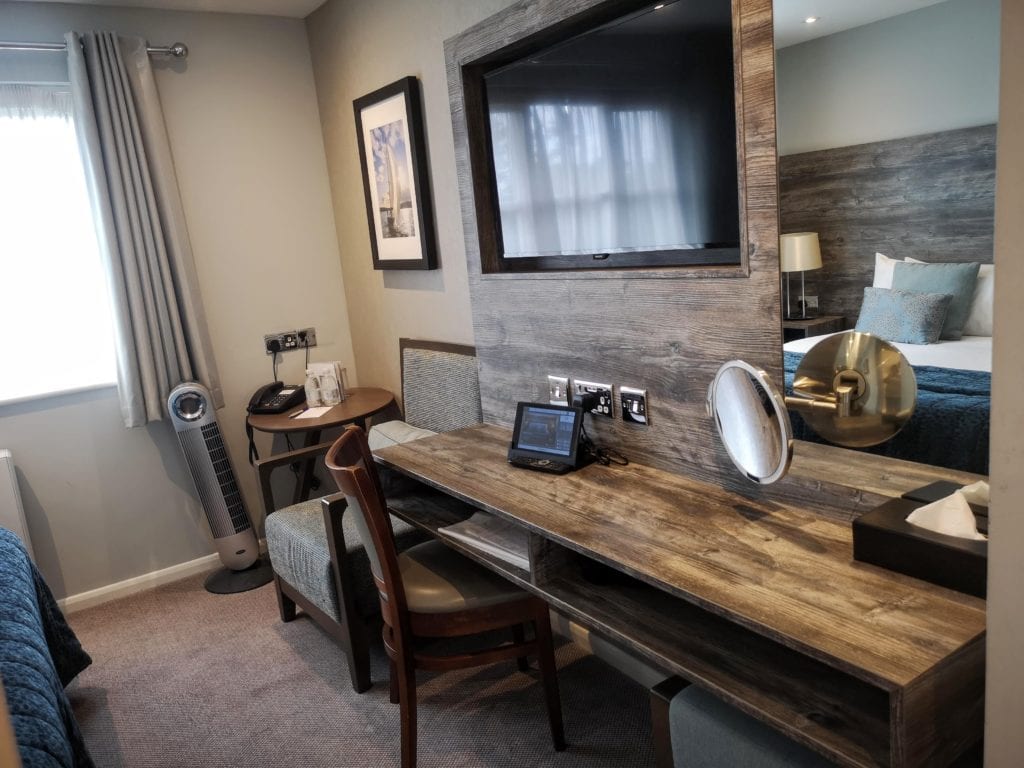 The desk/dressing table and television

It was very warm but there was a fan and I opened the windows (to see the biggest rabbits in the world – no lie! I had to go and tell the others. We couldn’t believe our eyes).

The bathroom was well appointed with an overhead and handheld shower. I made a little video tour of my room when I arrived (pre-cluttering it up with my luggage)

We dropped our bags and went down to the bar for a drink before getting ready for dinner.

The bar is within The Waterfront Brasserie

We took our drinks and found an empty table facing the lake. It is a very relaxing and tranquil area with lots of wildlife to watch. 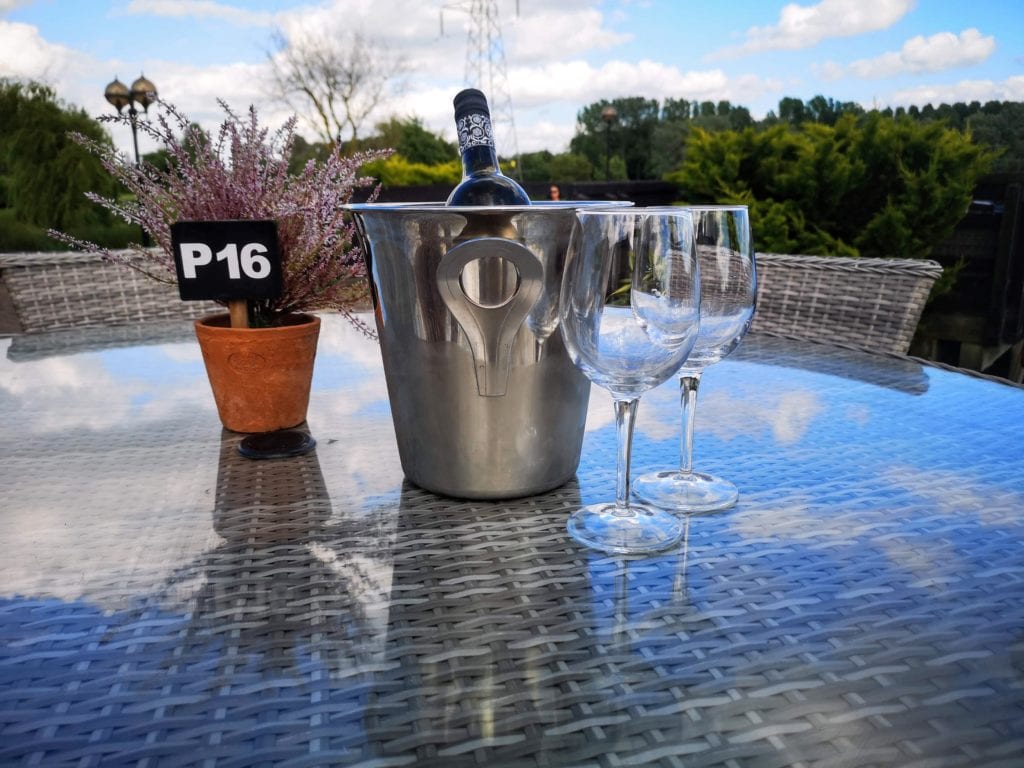 Our first bottle of wine of the evening, outside on the terrace

The restaurant was quite busy when we arrived. There seemed to be a function happening, we later asked and were told it was a couple of different golf club events. They were a bit noisy as we were sat quite close to them.

The menu isn’t vast but there was plenty to choose from, I’m vegetarian and had no problems (but then I’m not overly fussy). Both Anna and I chose Deep Fried Brie Bites and the Artisan Bread Board as a starter, Nikki went for the Brie and Chorizo Sausages. I’ll be honest, I could happily have eaten several bowls of the brie bites! 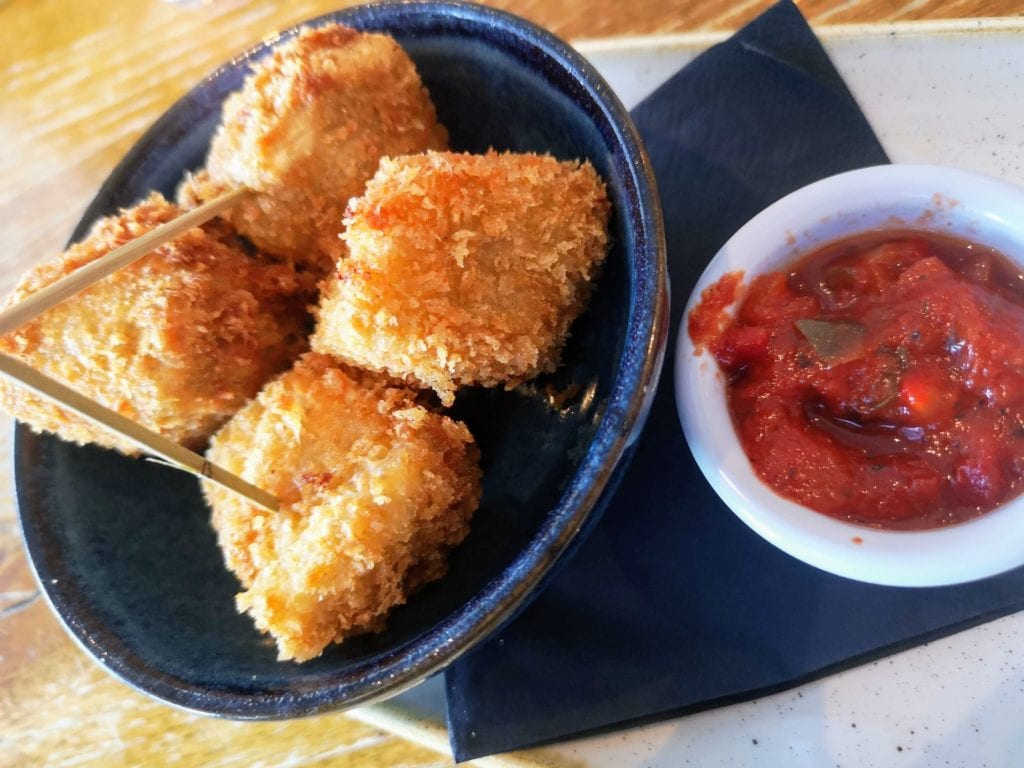 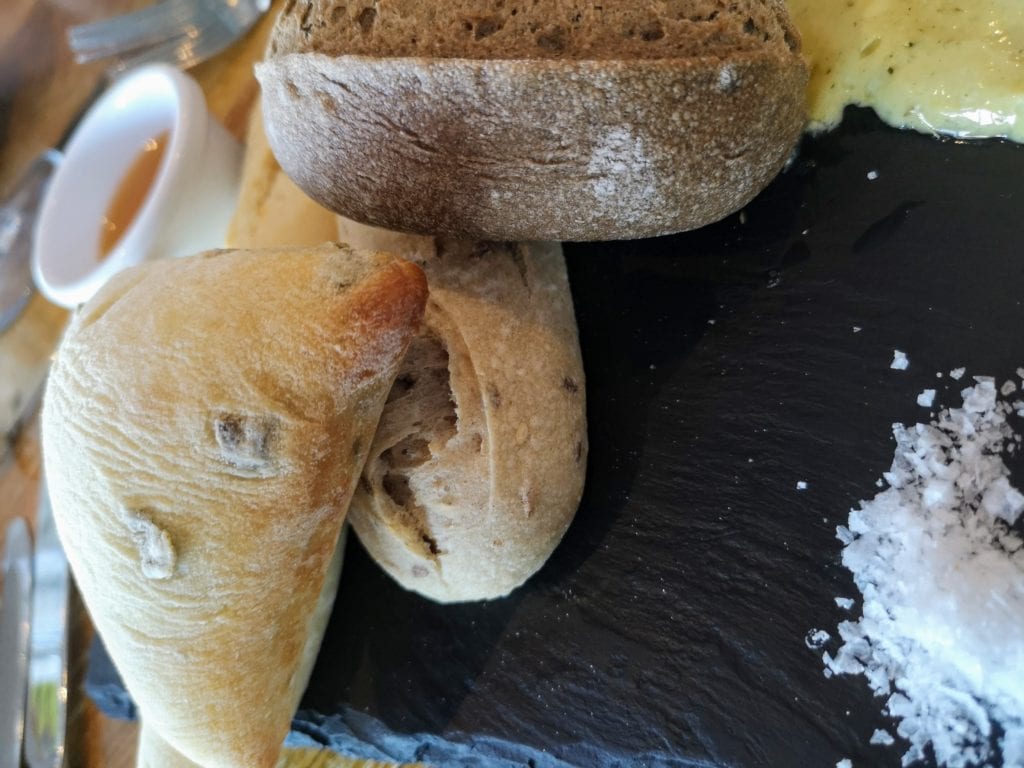 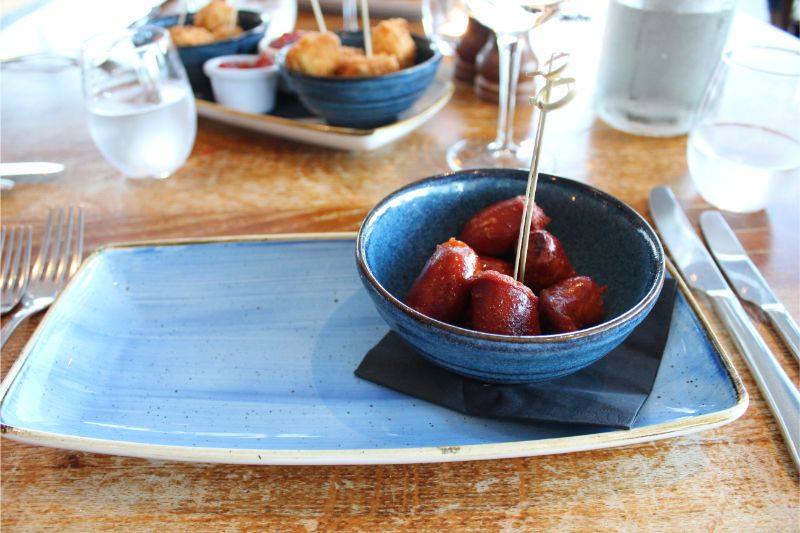 For our mains Anna and I copied each other again and both had Potato Gnocci and Nikki had Confit Pork Belly.

In all honesty the gnocci was a bit dense for our liking but I carried on picking at it for a while as the service between courses was slow. I expect this was due to the big group that was in but I feel that that should have been taken into account and provision made. 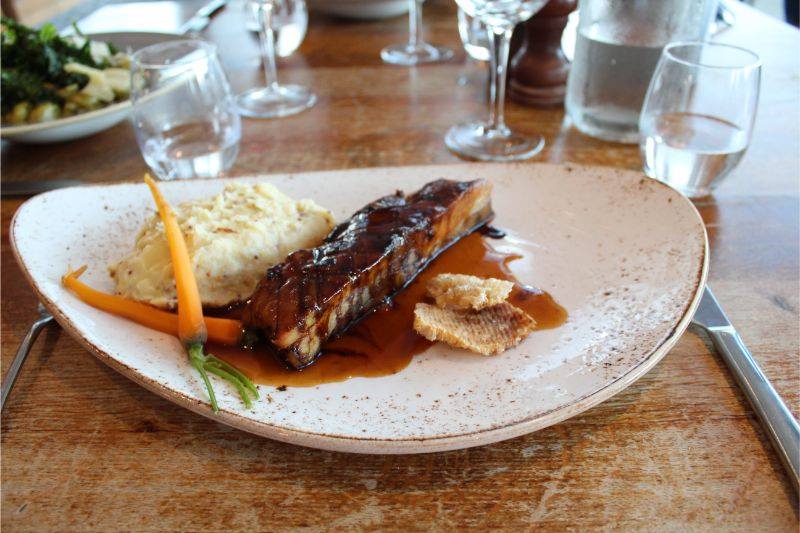 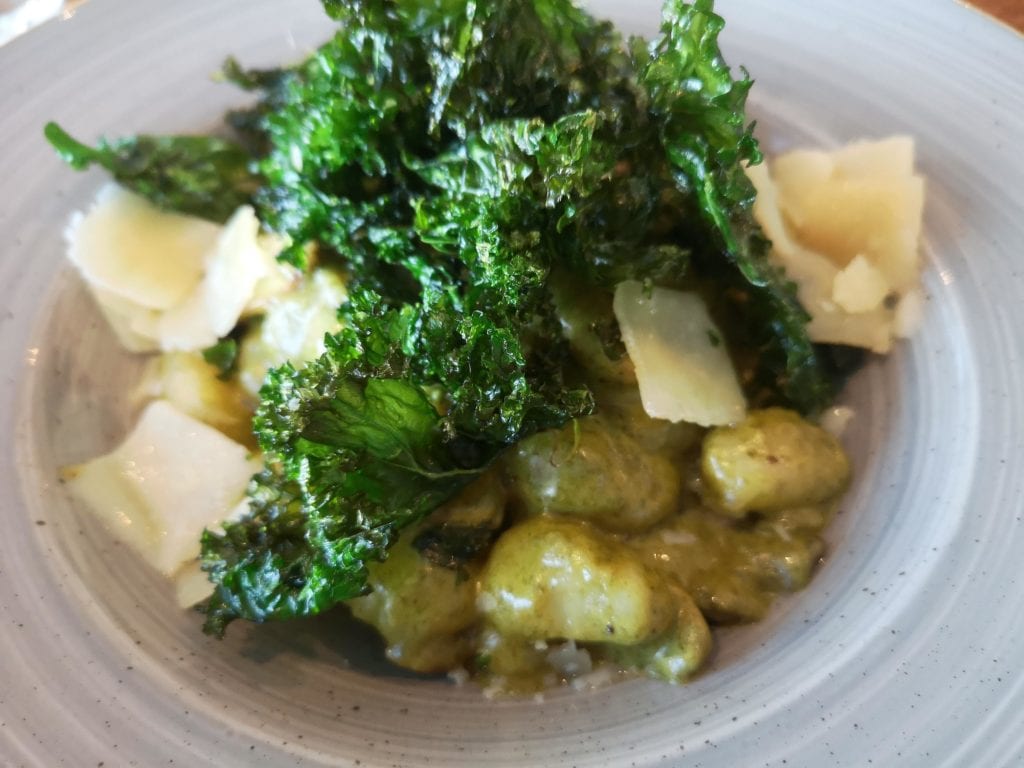 When our plates were cleared we asked if we could order dessert outside on the terrace to enjoy the rest of the evening, this was fine. Anna and Nikki went for Raspberry and Lemon cheesecake (Nikki had asked for Chocolate Ganache Mousse, but they had run out) and I had Sticky Toffee Pudding. There were no complaints with the desserts! 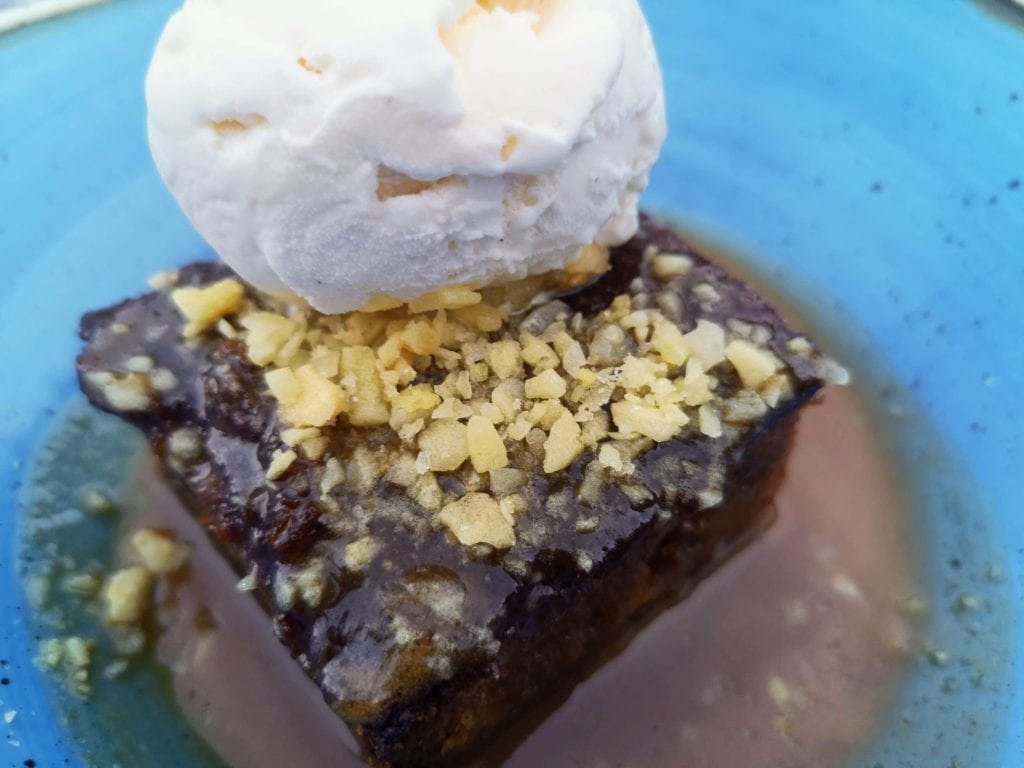 Sitting outside was very nice but the lights around the lake weren’t on, which seemed a bit odd as the lake is the main attraction (other than the spa) and the lights would have made it even more special.

I was bitten quite badly by insects so I would suggest you wear insect repellent if, like me, you are a target!

We were quite sensible and went to bed at a reasonable hour as we wanted to make the most of the spa the following day.

I had an indulgent pre bed shower using the lovely toiletries provided by the hotel. I then lay in my super king bed watching television before going to sleep – pure luxury 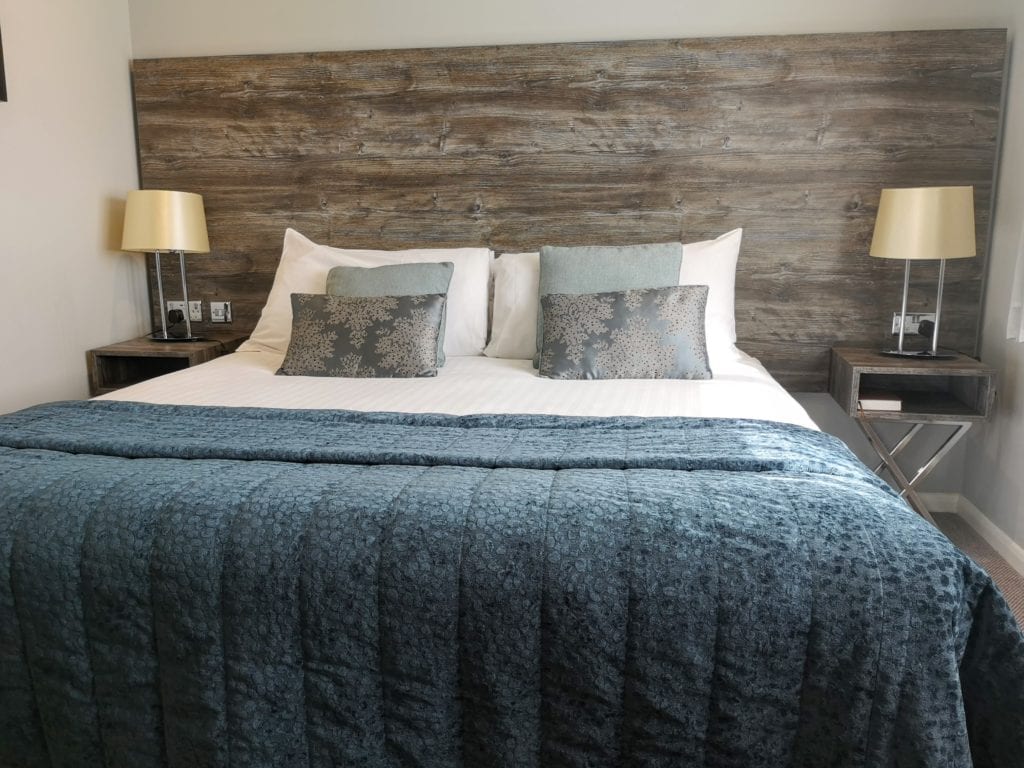 The king size bed in my Superior Room

I slept fairly well, I woke a few times but I think I over ate and over drank to be honest! The hotel was quiet apart from the road, but I’m used to that. The room was lovely and dark even in the morning.

I made myself a coffee, they provide coffee in bags which is much better than instant, we have filter coffee at home. I lay in bed and enjoyed the peace and quiet, something I don’t often get at home with two boys!

I packed my bags and met Nikki and Anna for breakfast.

Breakfast is served in a different room (not the restaurant) and is a buffet affair with full english being served from hot plates including bacon, eggs, sausages, fried bread and so on. You can order extras to be cooked fresh (like vegetarian sausages). I wasn’t keen on the vegetarian sausages as they were made of vegetables rather than being of the Quorn or Linda McCartney style, but that is my preference. 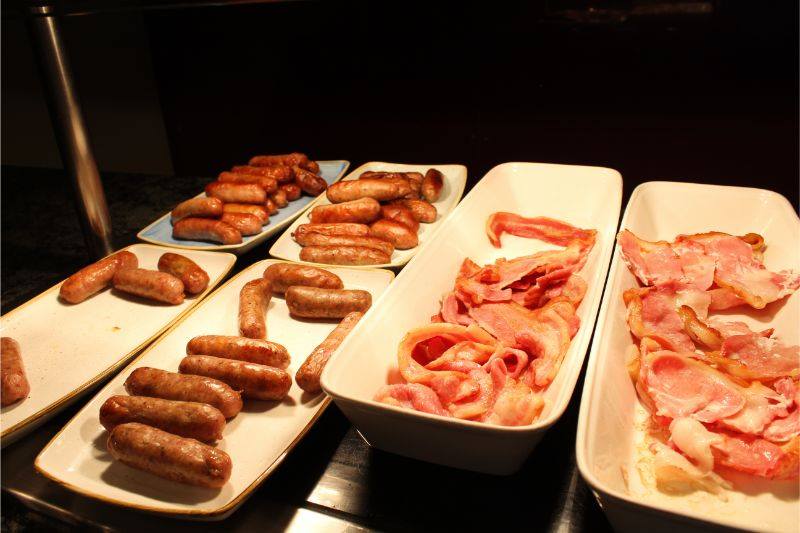 Tea and coffee was prepared fresh and there were fresh juices that you could help yourself to. The pastries consisted of croissants but no danish. I myself like a Danish pastry – I consider it “pudding” after breakfast in a hotel!

After breakfast we headed to the spa…

Any little niggles we may have had over dinner and breakfast were soon forgotten here. The spa was a highly relaxing experience. 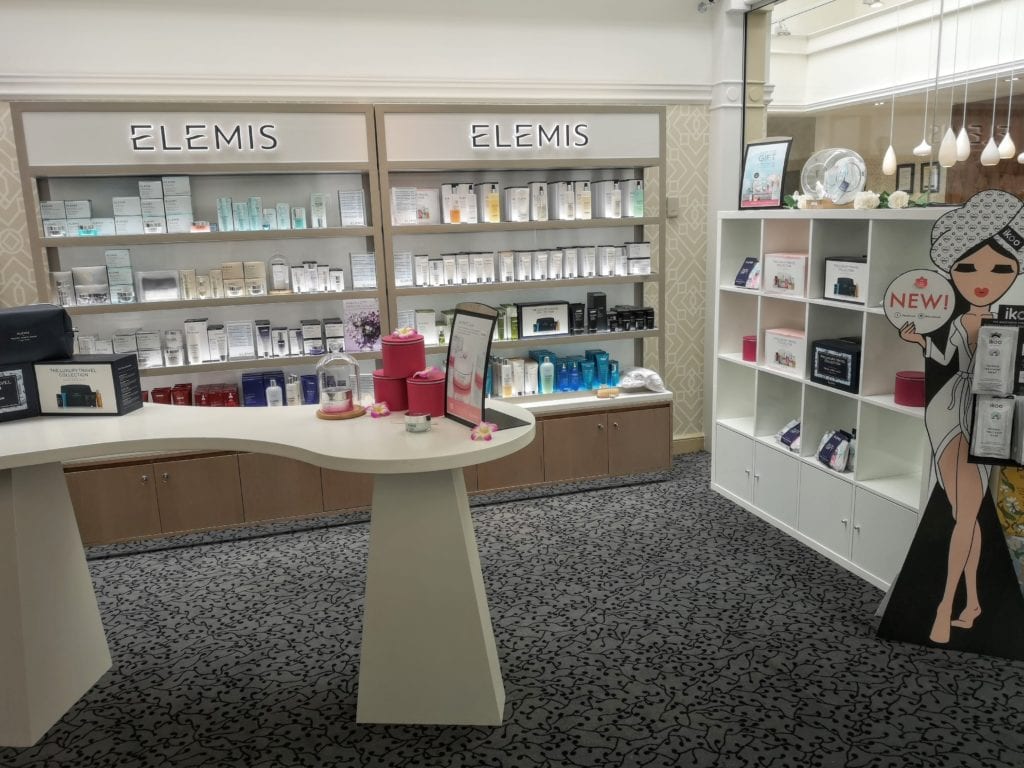 We were given goodie bags with a personalised note which we were thrilled with (it’s the little gestures that make us happy). And given wristbands for our lockers.

Inside our lockers were our gowns and slippers. The changing rooms are a little odd as they are just separated by curtains and it is hard to tell if anyone is already inside. We all got changed into our swimming costumes and no dignity was lost. 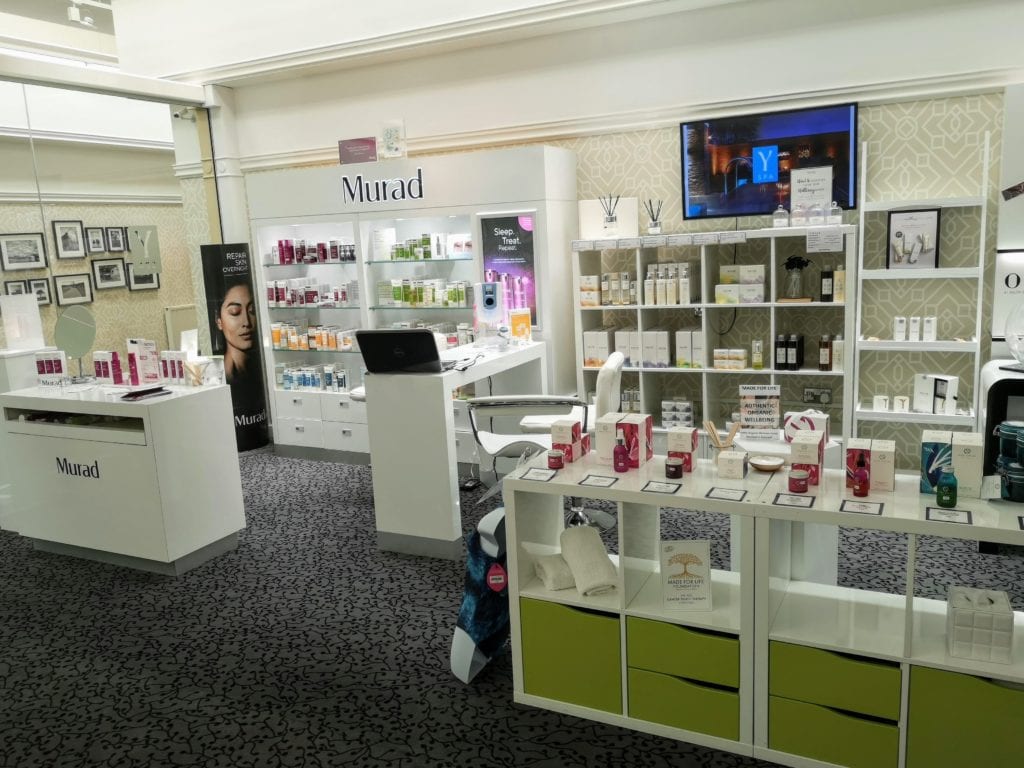 I’m sure Anna and Nikki won’t mind me saying we are all ladies of a certain age and are *cough* not the smallest of women (my robe didn’t meet in the middle!) but we didn’t feel at all self conscious.

We found our way to the spa and had a wander round to get a feel of it and take photos. You aren’t actually supposed to have mobile phones in there but we were careful not to take photos including anyone and put them straight back in our lockers afterwards.

What does the Y Spa in The Waterfront Hotel, Wyboston Lakes Resort offer?

There are two different steam rooms, saunas and a hydrotherapy pool. There is a relaxation section where you are asked to be quiet – we didn’t use that as we like to natter! There was even a room devoted to sleep. This whole section was lovely and peaceful. 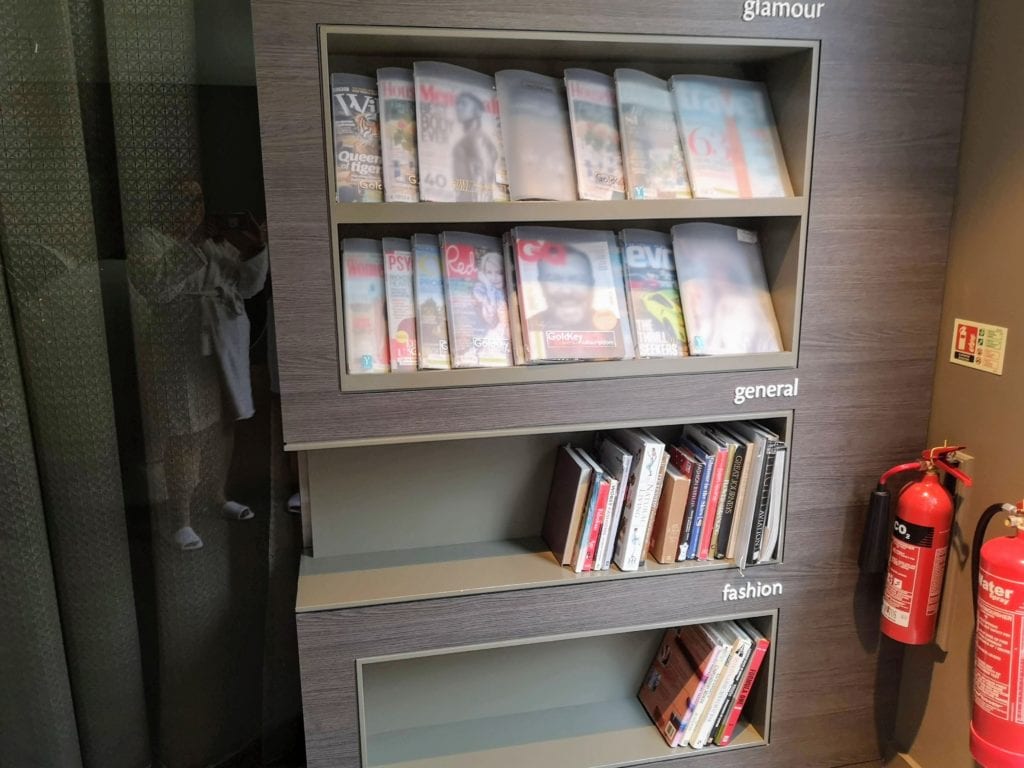 Magazines on offer in the relaxation area

Although the spa was busy on the day we went we had no problem using any of the facilities. We found the pool to be a little crowded for our liking but discovered afterwards that they have a cracking offer of an overnight stay on a Sunday and use of the spa on Monday for £75 per person which explained its popularity! 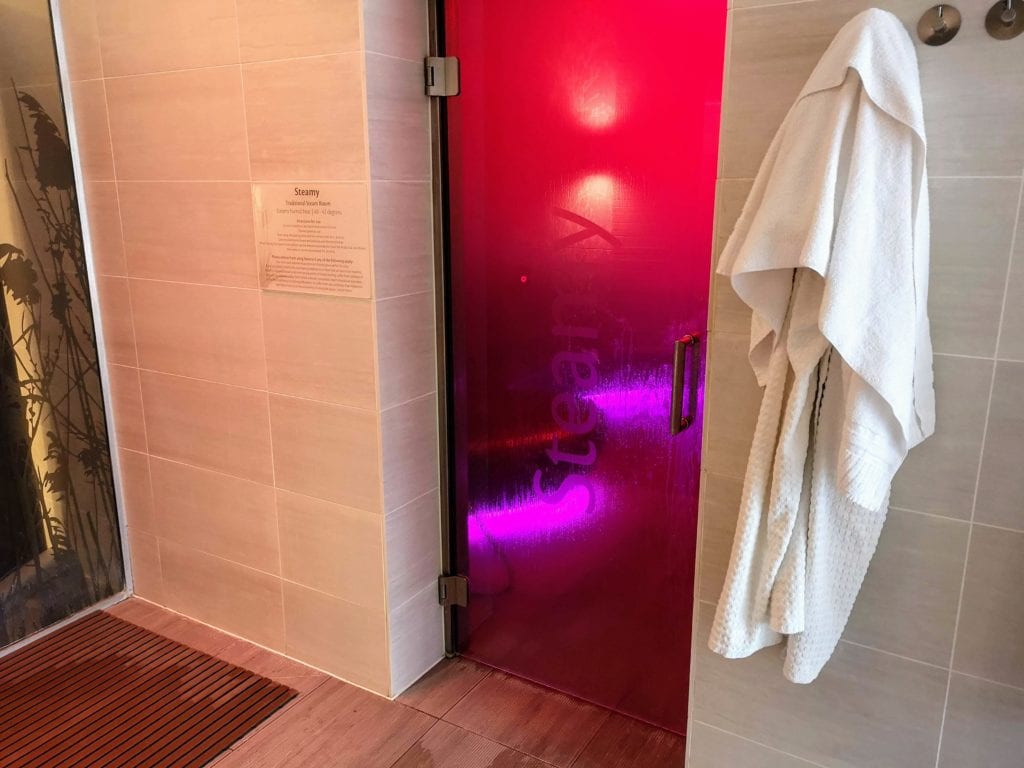 One of the steam rooms

The whole place smelt divine. Even the water from the showers had a floral scent!

My favourite room was the salt room which was hot, but not too hot, and intermittently showered you with salt crystals. The lights change colour too.

The spa offers all sorts of treatments, from facials and massages to eyelash tints and manicures. We didn’t book any of these as we wanted to spend our time chatting, but if I was to go back I would certainly like to give one a try.

After we had finished spa-ing (not a word but it should be) we showered using the gorgeous products provided (the same as in the hotel). The dressing area is well appointed with the same sensor mirrors as the bedrooms and hair dryers at each station. 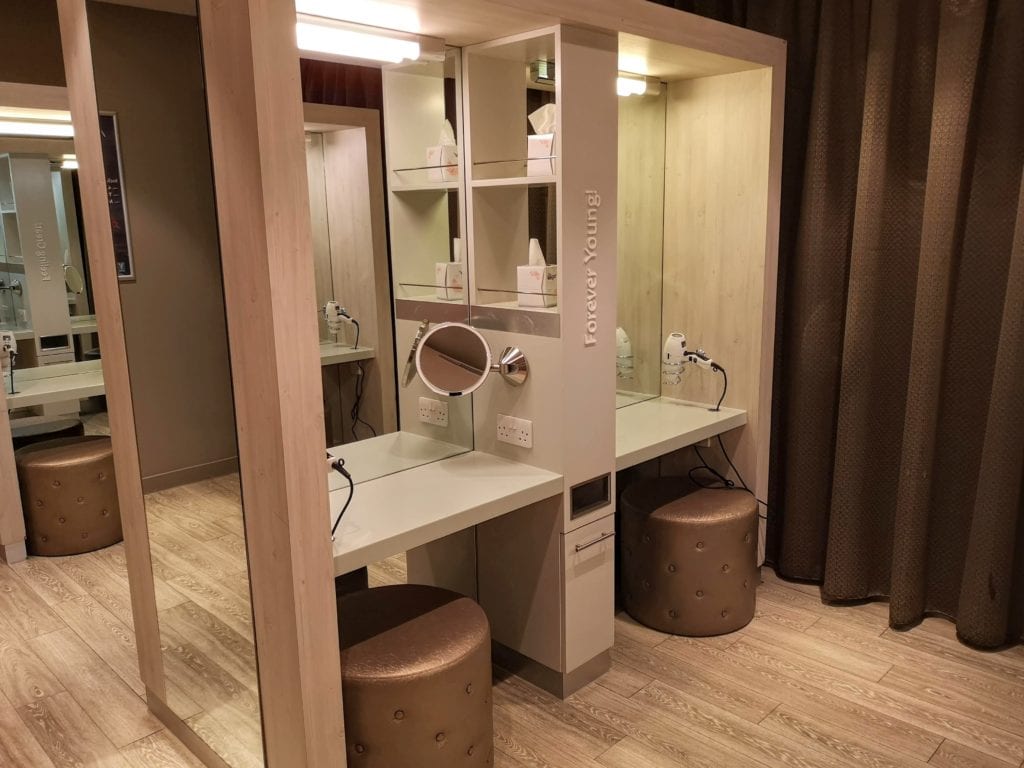 The vanity units in the changing area at Y Spa

We grudgingly made our way to lunch – we really didn’t want to leave!

Lunch, like breakfast, was a buffet affair. With soup, hot and cold dishes and dessert on offer. Water was provided but soft drinks had to be ordered. 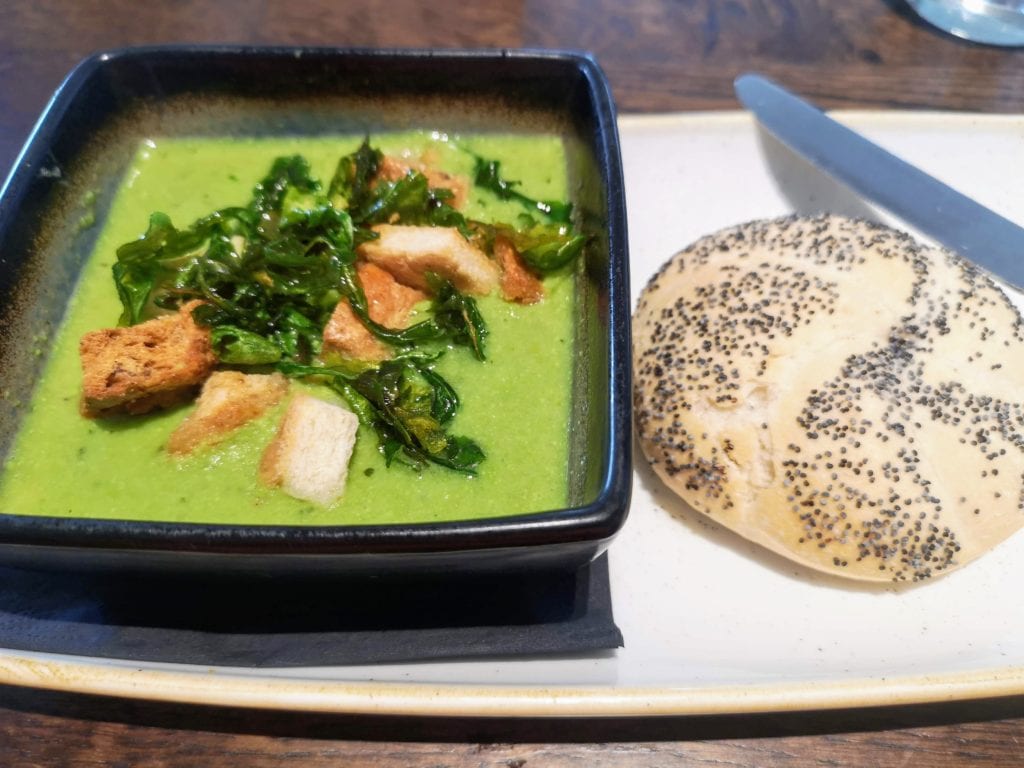 I had goats cheese and caramelised onion tart with salad and potatoes, but there were a variety of hot and cold meats and warm vegetables on offer. 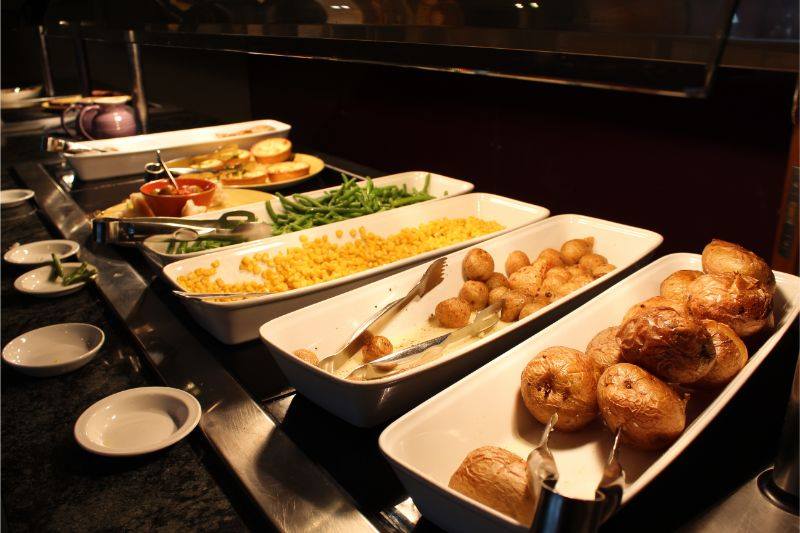 By the time we got up for dessert much had gone but I was full from lunch anyway. Then it was time to go home.

What did I think of The Waterfront Hotel and Y Spa at Wyboston Lakes?

I would certainly go back! It is about two hours away from where I live in Sevenoaks but well worth the travel. Our evening meal wasn’t the best but it wasn’t bad either and the rooms are lovely. The Y Spa is definitely the jewel in their crown and worth the trip for that alone.

We had a lovely girly day and spent hours putting the world to rights and relaxing. Relaxing is something I don’t think we are very good at. Having young children and blogging can be hard work and you never really shut off, especially as you are on social media a lot which includes evenings and weekends.

I would recommend Wyboston Lakes for anyone that wants a break away from it all. Singles, groups and couples are all well catered for and you can do as much or as little as you like. The staff are very friendly and the atmosphere very relaxed.