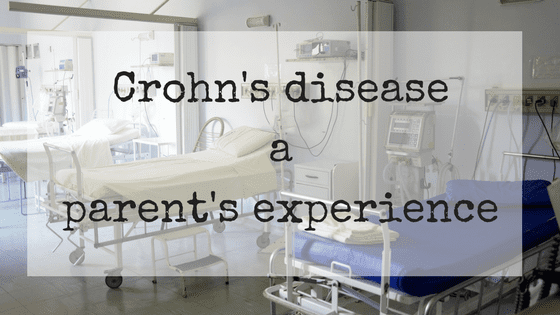 You may have already read my accounts of living with Crohn’s if not you can find them collectively here.

In light of the fact that Crohn’s is back in the news again today, thanks to Dynamo, I spoke to my mum and my partner, Vince, this morning and suggested that they might like to put their experiences down. We often hear from the person with the disease but not their family. My mum clearly took it seriously as this popped into my inbox before lunchtime!

Erica has written an account of her experiences having been diagnosed and living with Crohn’s disease over the last few years and the consequences of needing multiple operations.

She asked me to give an account, as the parent of a child (even though she was in her thirties when first diagnosed) who is suffering from the disease.

Let me first say that I have, over the last few years, gained a mental block to the incidents which happened (or maybe it’s my age) when she had her first operation.  We were assured it was a ‘simple’ straightforward keyhole surgery  to remove part of her affected bowel and following her op on the Wednesday were assured everything was fine.  Unfortunately it was anything but as she developed sepsis due to a perforation of her large bowel during her operation which was left undiagnosed until the following Sunday.

We visited her on the Saturday and she was clearly very unwell but the staff seemed to think she was exaggerating her symptoms. Seeing her in so much pain and being unable to do anything to help her was horrendous.

She eventually underwent emergency surgery and was left with two stomas and was in hospital for a total of four weeks. There have many frightening incidents but I think this was the worst as she phoned me late in the evening to let me know they were taking her into surgery and I broke down, which in hindsight was unforgiveable, as, as she said ‘don’t cry mum I’m not’, but I was terrified we were going to lose her. No, it’s not a Cornish Pasty that is my stomach

Erica and I had been on our own as a single parent family since she was seven and my parents had died and her partner, who is French, had no family close so we both had to cope on our own with our distress

She had a small son who needed looking after and when her partner had to return to work I took on the role of looking after him.  This is where my mental block comes in. Erica tells me I had Luca to stay with me on occasion and I can remember very little about it. When she came out of hospital I know I went to her house to help take care of Erica and Luca and do small chores around the house but again I have blocked it out and I am finding it quite distressing as I write this that I know she was in constant pain and it is bring back things that I have managed to conceal in the back of my mind.

If you have read her blogs you will know that she has had to undergo numerous operations following on from her initial surgery and has since developed a fistula and abscesses and is at present undergoing biological treatment, which appears to be having some success but will I understand be lifelong unless a treatment is discovered that will potentially cure the disease in the future.

In hindsight I should have made myself aware of the implications of the disease and its outcome.  I have since joined a Facebook community which puts in perspective the seriousness of the disease and the fact that it can be diagnosed in very young children and adults. My brother, who is 70 , has recently been diagnosed following an operation after he had a perforated bowel due to the disease.  It took some time to diagnose as they wanted to rule out cancer first and the subsequently found signs of Crohn’s at the operation site. Putting on a brave face before an operation in 2017

The thing that strikes me is that the people I have heard of who have this disease including Erica and friends of hers, and celebrities that are sufferers are so stoical.  They go through enormous pain, and suffering, and always seem to look on the bright side when you know they are going through very difficult times with their symptoms and just soldier on regardless.

As a parent you just have to be there and give help whenever you can.  It is very painful to see your child going through this and not being able to protect them.  It doesn’t matter how old they are they are still your little girl. 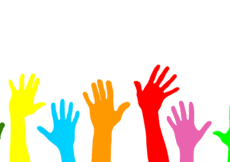 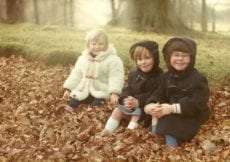 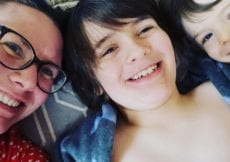