Home
Health and Wellbeing
My Life as a Fat Woman 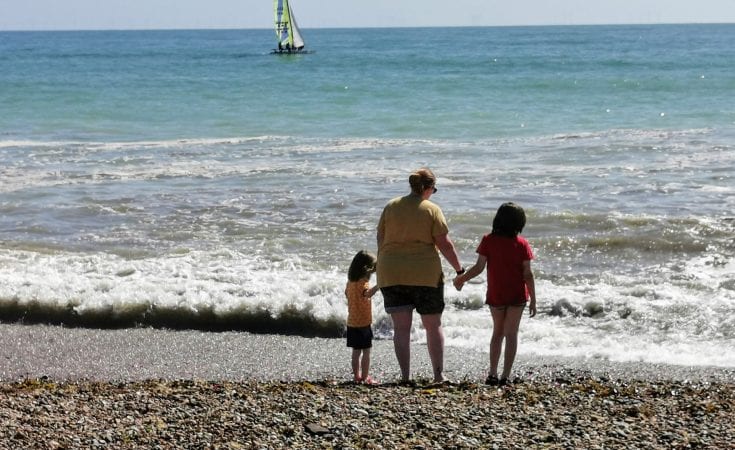 *Warning – contains a photo of a surgical wound

I am a fat woman.

I have always been fat. This is not true. I don’t think you class babies or toddlers as fat but for as long as I can remember I have been fat.

I have recently come back from a short break by the seaside and there are photos and videos of me from behind. I am not in a swimsuit, trousers (rolled up to allow paddling) and a t shirt, however I have one hell of an arse. In fact I was brave and shared the video on Instagram and was overwhelmed with the replies:

What do you see when you watch this? This first thing I see is my fat arse. What should I see? A mum, having fun with her kids, maybe. Granted the smallest one got soaked, he loved it! I've been beating myself up over my weight recently. I've written a blog post about my weight over the years that I want to add some old photos to, but I will share it in a few days. For women (and men) of a certain age body positivity couldn't come soon enough, I think the damage is pretty deep. It's ingrained in us. The less of us physically the better we were liked. We're congratulated for losing weight even if it is lost in an unhealthy way. This isn't good enough. I need to change the way I think about my body. I don't feel this way about other people so why am I so different?

Those of you who have followed me for a while know I have Crohn’s, I don’t have skinny Crohn’s I have fat Crohn’s (fellow Chronies will know what I mean). I have had lots of operations in recent years but I won’t use them as an “excuse” to be fat, not that we should even need an excuse, there is NOTHING WRONG with being fat. The fact is I love food. In fact I really love food, like for me food is love. It is often an obsession and has been since childhood. I was talking to my mum about my recent weight gain, lockdown is a large part of it as I was shielding but obviously I didn’t have to overeat as well as not go out, yet I did as did many of us. She was saying that her concern is more about my health however I am more concerned about how I look.

I care more about how other people perceive me than my health – how fucked up is that?

So let’s take a look at my life in fat…

At the age of 7 my dad left. Yes, I have daddy issues, I am aware of that – I have touched on this in my post about his recent passing dealing with the death of an estranged parent.

I was already chubby. Weekends spent with my Father were spent at the sweet shop and the pub. I could choose sweets for the weekend, and in the pub I was the typical coke and crisps kid. Around this time my mum took me to the GP for something entirely unrelated to my weight and the Dr told my mum (in front of me) I was fat and needed to go on a diet. This was around 1989. The Dr was fat but apparently that was OK, he just told other people they shouldn’t be. Maybe he had a health related issue, who knows, who cares? It was dealt with badly. And so it began.

At the age of 8 I was sent to a dietitian

Now if anyone remembers the 80s diets and exercise weren’t quite the same as they are now, think Lizzy (not Lizzo, sadly) and the Green Goddess, and hell did I feel like I was being punished. We were given a list of things I was allowed, chocolate and sweets did not feature on that list. I would go to the dietitian who was based in the local hospital and weighed. I was praised for losing weight. The less there was of me the better they liked it.

At this point I think I  should point out that my mum was doing the best for my health (and still is) she has always been naturally slim, in fact the vast majority of my family were. I was the fatty of the family and I knew it.

After a while I stopped seeing my father for reasons that I won’t go in to here – ain’t nobody got time for that. Food filled the void he left. It has been that way ever since. If shit goes down I eat. If I am worried or stressed, I eat. Basically I eat ALL OF THE TIME. I have abused laxatives. I have made myself sick. I have attended overeaters anonymous. I have done Slimming World, Weight Watchers, Slimfast. I’ve joined gyms. At the age of (almost) 43 I remain fat. Obese, if you will.

This isn’t to say I am unhappy with my life at the moment but it is quite stressful, life is, isn’t it? So, guess what? I eat. 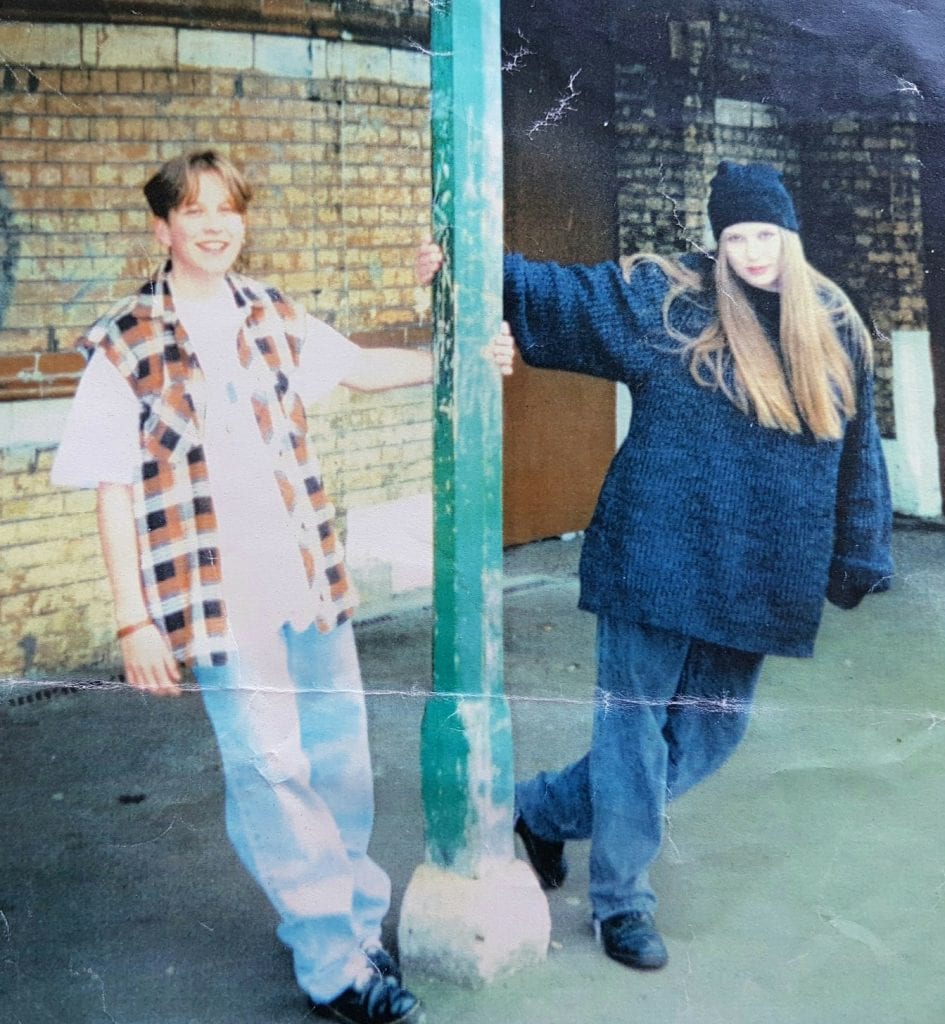 Me (on the right) with my Bestie. Aged about 16 for her media studies project

Thin was king. In the 90s we had heroine chic with Kate Moss leading the way. I hated the way I looked as a teen. I mean HATED. I hated my figure, I hated my face. I used to get so angry I would self harm. I wore mens jeans and huge jumpers to hide myself in my early teens.

The only time I have lost weight was after I left my ex husband. I stopped eating because I felt sick. I don’t know if this was a precursor to Crohn’s being diagnosed or stress or both. I lost 6 stone in 6 months. I basically lived on cigarettes, tea and a party lifestyle. This is not a diet you find in glossy mags, maybe the memoirs of one of the Stones…

I looked amazing by other people’s standards. Apart from the wobbly bits. Everyone told me how good I looked. It was great. But it clearly wasn’t healthy, I mean I was surviving on alcohol and nicotine for fucks sake. I looked in the mirror and for once I wasn’t horrified but in my head I was still fat. I was a curvy size 16 and I could shop just about anywhere, previously it was Evans or, well, Evans pretty much. Fashionable shops didn’t really start selling clothes over a 16 to 18 until more recently.

This was taken when I was on holiday in Cyprus at my slimmest, I was about a size 16

I vowed I would never put on weight ever again

But I did. I met Monsieur Incidental and it began to creep back on. We love going to restaurants and wine. I fell pregnant with Big L. Then I was diagnosed with Crohn’s.

I had several operations, including two stoma, then reversal, I have a scar right down my middle and have incisional hernias from the stomas and laparotomies. Physically (and mentally, I suppose) I am a bit of a mess but I am alive. I managed to lose a lot of the weight I put on then I unexpectedly fell pregnant again. I say unexpectedly because I had not long had a major operation and didn’t expect my body to be in any kind of shape to conceive. 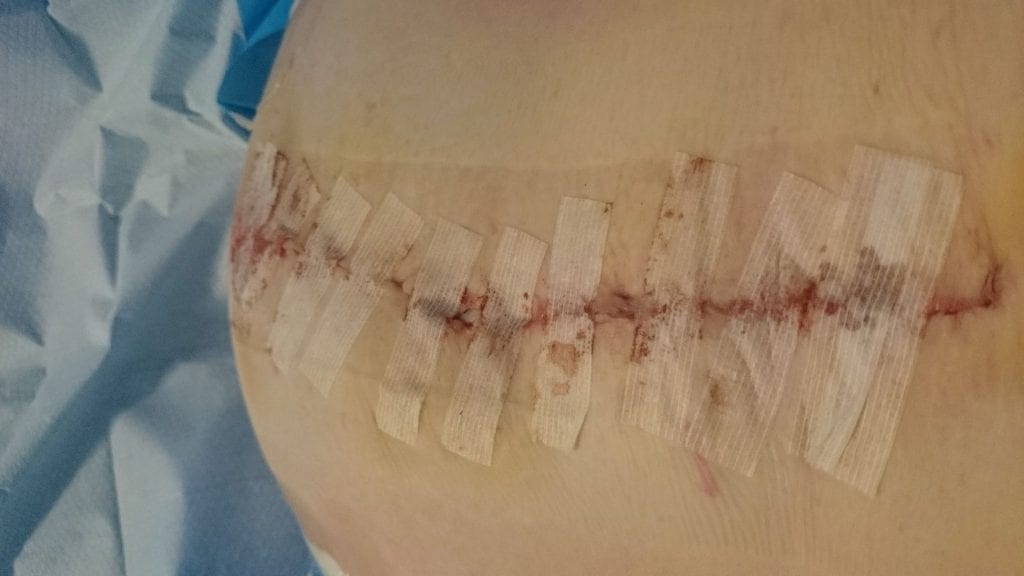 Anyway, guess what. I put on more weight.

I am not happy. The thing is, and here’s the rub, I don’t actually hate the way I look as much as I’m worried what other people think of me. I see wonderful body positive photographs on Instagram, people who are all different shapes and sizes and they are beautiful. I want to be like them. I want to wear the tight, bright clothes and be fabulous. I need to get my head in the right space. I also need the cash to buy the beautiful clothes! I won’t lie, I would like to lose a bit of weight, if not only so my boobs can actually fit in my bra (I’m a 38K, I can’t find anything bigger but feel free to let me know if you know of anywhere or have recommendations) but also as I will require more surgery in the future.

What I would say is that if we all woke up tomorrow and suddenly being fat was considered beautiful and fashionable would I be beating myself up over this? No, I probably wouldn’t… 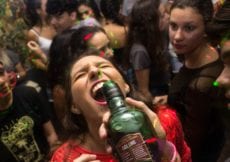 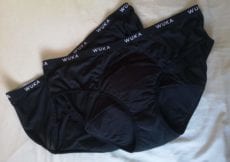 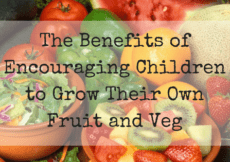